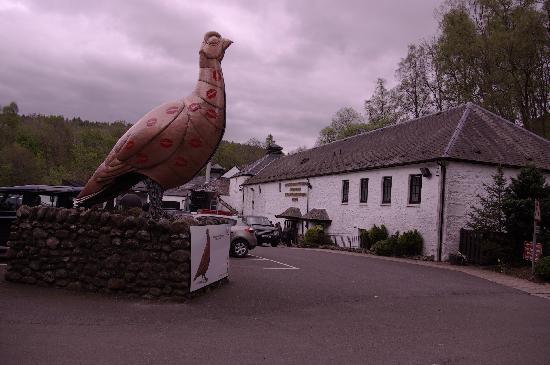 No recorded activity and GPI are the first paranormal group to investigate the distillery.

On a previous visit, team psychic/medium Lorraine, had encountered various energies; in University Room a spirit named Gerry/Gerald, a cleaning lady within staff quarters,  a former worker named Karen in office, and a cat.  On walking through the gift shop and The Show, she experienced pain in her arm, and felt strongly that someone had seriously injured their arm here in the past.  She also advised that there seemed to be activity within The Gloag Room, Restaurant, in particular the stairway and The Warehouse

Due to Lorraine encountering “Gerry” within the University, we set up 2 bottles to see if this would encourage any activity.

In the Warehouse, we placed a locked off camera with a crucifix

We placed motion detectors at the stairs within the restaurant

At the staff quarters we also placed motion detectors

Lorraine felt that Gerry’s energy within the University was very strong, and for that reason we set up the CCTV within the room.

We also set up a microphone and left a laptop recording within The Gloag Room.

Team members were equipped with night vision camcorder, K2 meter and situated themselves in the corridor next to toilets.  All team members heard various clicks and bangs, some in response to questions, other appeared to be random and could potentially be pipes or heating.    Lisa asked for any energies present to walk towards or past the K2 meter.  It was at this point that Michelle noticed a small orb in the viewfinder of the camera, pass in front of meter and the orb is later confirmed on reviewing the footage.   The team also ask out for more activity and a toilet flushes randomly.  The team investigate this and it seems to be from within the gent’s toilet.  However, the team understand that there have been plumbing problems over past couple of days, with the ladies toilet flooding.  All team members hear footsteps and movement in the corridor beside the staff quarters.  Michelle radios rest of team to check their whereabouts and all team members can be accounted for.  The team cannot explain these footsteps.  Kim also reports she has seen movement from underneath ladies toilet, where the light is shining through.  There is no one in these toilets and further investigation confirms this.  There is no further activity during this vigil.

Both team members experience footsteps and bangs.  They cannot isolate where these noises are coming from and all other team members can be accounted for in other parts of factory.

Lorraine felt this area very active and encountered the energy of a woman called “Karen Marshall” and it looked like she was dressed in a style from the 1970s-80s.  Lorraine said there was a book with previous employees’ names.  Natasha couldn’t find this book but Lorraine said that “Karen” told her it was in a drawer and pointed to the metal filing system.  Natasha looked in this drawer and located the files with names.  They encountered various bangs and movement in the room.

They ask at one point if there is anyone present, to affect the computers that had been left running and after about a minute or so, the computer next to them makes a noise.  However, computers do generally make noise and it’s difficult to say if this was paranormal or not.

The Gloag Room/Restaurant/Bar – Billy and James

Both team members experience footsteps and movement and once again, cannot isolate where they are emanating from.  James also thinks he sees a dark figure duck down behind one of the tables.  He also reports seeing what appears to be a cat.  On further investigation, there is no one else present and all other team members can be accounted for elsewhere in building.  Billy had a strong feeling of someone on the other side of the dividing curtains in the Gloag Room and both heard footsteps out at the bar and were so convinced that another team were coming in to join them.  On checking this, no one was there.    On reviewing video footage, there is a loud distinct bang whilst sitting in the restaurant and it is not the type that we would consider as building movement or birds on the roof etc.

Team members sit quietly within this room and ask out for activity.  They all hear movement outside this area in the restaurant.  They move out to restaurant and sit in far corner. They experience more taps and bangs.  On asking out for more activity, they hear someone running upstairs and expect to see team members.  No one appears and they contact other team on radios.  No one has moved from their vigils and can be accounted for.  Kim then sees a dark figure move quickly against wall just at the stairs and it disappears.

Lorraine advised this area had a distinct atmosphere; however there was no activity or any visuals in video or audio footage.

The University – All Team Members

The team regroup in this room and Lorraine once again encounters “Gerry”.  Billy is operating night vision camcorder and advises team members that he feels a cold spot under his chin and briefly experiences some pain in his shoulder.  Lorraine advises him that “Gerry” is standing next to him, looking at the camera as he has never seen one before and doesn’t know what it is.   Billy then gets up and walks past K2 meter.  Lorraine asks him to follow Billy and the K2 meter lights up.  There is no electrical source next to meter and no one has a mobile phone with them to affect it.  This is the only occasion in this investigation that the K2 meter is affected.  Lorraine tells the team that there are other spirits entering the room and they are watching.  She advises that there are at least 10 of them standing at the entrance; however they are very unsure as to what the team are doing in the factory and seem unwilling to join the team.  Lorraine tries to encourage them but apparently they are still crowding the  doorway.    James asks for them make a sound; all team hears a dull thud from what seems above this room.  More footsteps and movement is heard by all team outside; no one else is in the factory.  On reviewing video footage, there is an orb passing in front of camera.

No trigger objects are moved during investigation.

Below is a breakdown of EVP (Electrical Voice Phenomenon) that the team feel they have captured and would consider good examples.

Michelle/Kim/Lisa – Walking through distillery, heading to Corridor over at University.

Whistling heard
Mans voice – no men with us at this point
Kim experiences a pain in her back walking towards the white warehouse area.
Young child’s voice – Mummy – heard on Dictaphone when girls are settling down in the corridor.
Faint child’s voice again heard
Voice saying No
Faint YES
Loud knock response
Strange noise heard by all the team – cannot confirm what this is
Loud Tap
Murmuring heard on the Dictaphone

UNIVERSITY – Michelle/Lisa/Kim
Just before entering the University you can clearly hear on the Dictaphone a woman’s voice saying something that sounds like GUARDS ROOM. We were all talking at the time, so this voice is unaccounted for.
Three distinct taps
Kim see’s a flashing light above barrels in corner.
Knock responses to talking about any energies knocking the bottles over
Faint Voice
Gerry response to Lisa saying “What would you mind us calling you”
The name Gerry said again faintly
Voice heard on Dictaphone
Kim has shooting pains in stomach

Michelle/Lisa/Kim – Walk though Mash Room, Tun Room, Still house, Boiler House, Filling Store
EMF Shows a small movement at one point
All team members continually hear people talking; no one is within range of them and other team members are accounted for in other parts of factory.

RESTAURANT – Michelle/Kim/Lisa
Faint Male Voice
Kim thinks she sees a shadow of a person ducking behind wall
Many unidentified noises heard by all.

James hears voices
Tap
Noises heard at back of room
Faint Voice
Faint voice indecipherable response to question “Are you scared of us in here”?
Boys think they hear “get out” on Dictaphone
More whispering heard on Dictaphone
Voice on Dictaphone saying “I am freezing”
The name James said on Dictaphone

Voices heard on Dictaphone
GET OUT clearly heard
Voice response to “Can you tell us your name”, however team are unable to confirm what exactly it says.

The team would like to say a huge thank you to Natasha for her assistance in organising and taking part in this investigation.  We would also like to thank Famous Grouse for allowing us access for the evening.  We feel there are various pieces of evidence which would suggest paranormal activity within the factory; for example unexplainable noises/footsteps, two team members witnessing a dark figure in the restaurant, orbs captured on video and some interesting EVP.  However, the team feels the location merits further investigation and hopefully will be permitted to return at a later date.