This is a very obscure theory and there does not appear to be much research into this or even where this theory originated from. However, this theory is often referred to as Theory of Familiarization or simply, Paranormal Stimuli.

It suggests that placing objects such as furniture, clothing, toys etc are placed into a location that formerly had these objects, will somehow evoke a reaction and spirits within this location will interact more as they are familiar with these objects.   This could be due to spirits having an emotional or sentimental attachment to these objects.    The GPI have used this theory and have had varying results.  During our investigation at RAF Montrose, we applied this theory and played music from the 1940s, relevant to the airfields time when it was operational.  CCTV footage revealed various orbs in the 1940s room.  However, during our second investigation, this theory yielded no results.

This is a paranormal hypothesis that has been suggested to explain the existence of ghosts, popularised during the 1970s. It seems to be derived from 1972 BBC dramatisation of Kneale’s play ‘The Stone Tape’.

Essentially, the theory proposes that inanimate objects can absorb energy from human beings, during times of tragic or high emotional stress such as a death, murder or even simple aspects of a person’s life. This stored energy can be released at any moment and results in a display of the occurred activity. This hypothesis suggests that ghosts are not spirits at all but non-interactive recordings like a film. Researchers state this replay can be triggered by someone with the correct attributes such as psychic ability, stress levels or even brain waves and set this recording off. This can take the form of a full manifestation or even noises such as footsteps, voices and can be repetitive.  Residual hauntings such a lady in white always seen walking in the grounds of a house, or an apparition appearing on the anniversary of a death have been attributed to this theory.

What is electronic voice phenomena ?

Electronic voice phenomena – or EVP – is a mysterious event in which human-sounding voices from an unknown source are heard on recording tape, in radio station noise and other electronic media. Most often, EVPs have been captured on audiotape. The mysterious voices are not heard at the time of recording; it is only when the tape is played back that the voices are heard. Sometimes amplification and noise filtering is required to hear the voices.

Some EVP is more easily heard and understood than others. And they vary in gender (men and women), age (women and children), tone and emotion. They usually speak in single-words, phrases and short sentences. Sometimes they are just grunts, groans, growling and other vocal noises. EVP has been recorded speaking in various languages.

The quality of EVP also varies. Some are difficult to distinguish and are open to interpretation as to what they are saying. Some EVP, however, are quite clear and easy to understand. EVP often has an electronic or mechanical character to it; sometimes it is natural sounding. The quality of EVP is categorised by researchers:

* Class A: Easily understood by almost anyone with little or no dispute. These are also usually the loudest EVPs.
* Class B: Usually characterised by warping of the voice in certain syllables. Lower in volume or more distant sounding than Class A. Class B is the most common type of EVP.
* Class C: Characterised by excessive warping. They are the lowest in volume (often whispering) and are the hardest to understand.

The most fascinating aspect of EVP is that the voices sometimes respond directly to the persons making the recording. The researchers will ask a question, for example, and the voice will answer or comment. Again, this response is not heard until later when the tape is played back.

The Origins of EVP 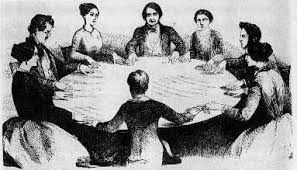 In the late 19th and 20th century, séances were used to make contact with the other side. By using horns or other equipment to try and create a voice from the spirit realm, mediums would ask for spirits to come forward and communicate using these devices. It then would then evolve to other methods, such as a drum and then eventually the medium would ask the spirit to speak. Whispering would be heard, which gradually became loud enough for everyone to hear. Of course most of these séances were found to be faked.

In 1959 the first documented case of a EVP recording took place accidently. Fredrich Jurgenson from Sweden, was recording bird songs and while playing back the material he came across a man talking in Norwegian about songs of the birds. On further recordings other voices were picked up and it was also noted that the voices all spoke faster than the average person.  Strangely enough if you ask a medium what it is like to communicate with the other side, they will all mostly say that spirits speak a lot faster than ourselves.  In 1964, Jurgenson published “Voices from the Universe” and due to this Konstantin Raudive a Latvian psychologist took a keen interest. Raudive started doing his own voice recording and published the book “breakthrough” in 1971. Due to these recordings and the evidence of EVP,s, the term “Raudive Voices” is still used in connection with EVPs today.

GPI have found however that EVPs can be misinterpreted, e.g. we had a female voice recorded, that on closer analysis was actually a male team member. It has to be remembered that voice frequencies can be changed due to many reasons, so never just assume an EVP must be paranormal. That is why video recordings are vital in an investigation, so they can be matched up with the timing of the EVP.

With advancements in modern science and technology, the chances of being able to have a clear verbal conversation with those that have passed over are just a matter of time. Hopefully GPI will be at the forefront of that discovery.

TEN handy hints for getting the best EVPs

1  When recording, do not have the device in your hand whenever possible

2  Do a test recording first, as certain surfaces can cause interference

3  Make sure at the investigation location there is no natural noises that could be picked up in the recordings or be aware of these if they cannot be eradicated, so to cancel them out when playing back the recordings

4  Turn off mobile phones, iPods and do not place any dictaphones near electrical equipment

5  If asking questions leave sufficient space between each one, allowing adequate time for a response

6 Listen back to recordings after a few questions, to see if you have any EVP evidence that could help with further questioning

8  If anyone coughs, stomach rumbles, move their feet, turn torches off/on etc, say so for the Dictaphone. These noises could be misinterpreted on playback

9  When starting to record, say what room you are in and who you are with, this helps identifying synchronisation with video recording and also assists report write up

10  Listen to the recordings a couple of times, as your hearing takes time to tune in